A nod to bobbleheads 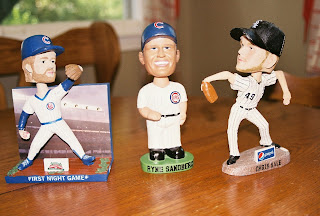 It's true confessions time.
I am rather (that is, very) hooked on bobbleheads. We have nine in our collection and are poised to hit the decade mark this weekend.
On Friday, August 8, I went to the Cubs game and received the First Night Game bobblehead, celebrating that historic day, August 8, 1988, when the lights went on at Wrigley Field. Rick Sutcliffe was the starting pitcher that day, so that's who is on the bobblehead, pictured above.
The photo demonstrates how far bobblehead technology has advanced. Note that the Chris Sale bobblehead (acquired earlier this season at a White Sox-Yankees game) truly captures his arms-and-legs-akimbo pitching motion and scraggly beard. Now look at Ryne Sandberg in the middle, a bobblehead I acquired many years ago. About the only resemblance to the Hall of Famer is the hair color. It looks like a cross between a kewpie doll and Bruce Banner shortly before he transformed into the Hulk.
On balance, I'm at peace with my obsession. It could be worse. I could collect those life-size Fathead wall graphics.

Posted by Unknown at 5:18 PM No comments: