Day at the park 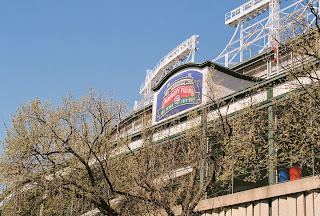 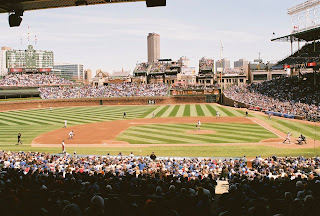 Posted by Unknown at 3:20 PM No comments:

Birthday party for a ballpark

On Wednesday, April 23, I had the pleasure and joy of attending Wrigley Field's 100th birthday party.

There was quite a crowd outside the ballpark before it opened at 11:30 . . . but it was a happy crowd. We were all excited and happy to be there, just as we each had dozens of times before.

When it opened in 1914, the premier cathedral of baseball was called Weeghman Park and was home to the Chicago Federals (aka the Whales). The Cubs played at West Side Park but moved to Weeghman two years later after the Federal League folded. The name changed to Cubs Park in 1920; six years later, it was named for its owner, William Wrigley, Jr.

Few of the facts and figures were in the forefront of my mind while I waited in line (my dear husband was off parking the car). I just knew I had to have the day's promotional giveaway, a replica Chicago Federals jersey. I got one plus a birthday cupcake, courtesy of Jewel-Osco. All this and I was barely inside the ballpark.

I entered through Gate D and made my way to Aisle 215. The going was slow as I gawked at the mural-size photo of concession workers half a century ago and smelled the aromas from the Decade Dogs stand. Finally I climbed the stairs to the field, up and out in the sunshine, overwhelmed by the green of the field, the festive bunting, that big beautiful scoreboard.

Suddenly it's 1964 and I'm holding my dad's hand as we step onto the walkway. We're en route to seats in line with first base and Ernie Banks. We're at home at Wrigley Field.

Eventually I got to our seats--my husband, Bob, was already there--and was ready for a history lesson disguised as a nostalgia tour. We sat in terrace reserved on the lower level, in the 12th row, just to the third-base side of home plate. From there, we experienced a celebration done right. Popular music from all through the decades came from the Lowery organ (at a pleasing decibel level). Organist Gary Pressy accompanied Wayne Messmer on the National Anthem for the enthusiastic crowd, altogether fitting for a ballpark that in 1941 became the first to feature an organist.

The pregame ceremony was perfection, highlighted by the introduction of Cubs and Bears stars (Dick Butkus and Gale Sayers) from the past 50-plus years (the Bears played at Wrigley from 1921 to 1970 before moving to Soldier Field). From the 1969 Cubs (Ernie, Fergie Jenkins, Glenn Beckert, Billy Williams) to 1980s teams (Andre Dawson, Lee Smith) to the recent past (Ryan Dempster), the players evoked the joy and heartbreak that is the life of a Chicago Cubs fan.

Oh, yes, and a baseball game was played. In tribute to that first game in 1914, the Chicago Feds (Cubs) played the Kansas City Packers (Arizona Diamondbacks), complete with throwback uniforms. We were fortified by hot dogs, today's version of a Frosty Malt, and, when we couldn't bear the thought of an ice-cold pop, coffee. Although we were bundled up, we were cold--Bob even put on his gloves--and left after the seventh inning. So we saw a great ballgame (things fell apart in the ninth).

Only a few things would have made the day even better: if my dad had been able to be there, if Kerry Wood had shown up for the festivities, and if they had served Smokie Links like the good ol' days. But it was still a wonderful day at the Friendly Confines.

Posted by Unknown at 2:24 PM No comments:

The sound of music

Chicagoland does not feature much in the way of hills, but the plains certainly are alive with the sound of music. Especially now, during Holy Week.

I have the joy and honor of singing in two choirs, Grande Prairie Singers and my church's. This week is especially rich in harmony--and dissonance, as befits the solemn aspect of these days--at St. John's Episcopal Church. We're singing at the Maundy Thursday service tonight, Evening Vespers tomorrow, the Great Vigil of Easter Saturday night, and of course Sunday morning's joyous Easter celebration. We are blessed to sing excellent anthems, hymns, and chants and privileged to help lead the congregation in worship.

Through music, we also can connect with the communion of saints reaching back centuries. In what our choir sings this week, many of the words are from Scripture and the early church; the music, spanning the Middle Ages to Mozart to 19th-century hymns to contemporary service music. Imagine how many believers have praised, confessed, and prayed via these works. Even now, throngs join us from heaven to worship God.

One of the many blessings of the parish of St. John's is that our music director, Michael Soto, is an accomplished--no, make that truly gifted--organist. He enhances our worship more than he knows. To quote Victor Hugo, "Music expresses that which cannot be put into words and that which cannot remain silent."

Today is my father's 87th birthday, and I'm very thankful for him. Among the things he taught me are

Unless my almost-senior mind is playing tricks on me, I haven't seen Dad (who lives in Florida) since my wedding to Bob Burgwald seven years ago next month. Gotta remedy that soon because he doesn't travel any more. We do talk on the phone often, most recently the day I got tickets to the Wrigley Field 100th birthday party game on April 23. I also sent him a card along with some clippings from the Chicago Tribune about Wrigley, including an article that made a great concession to the wonders of that long-ago treat, the Smokie Link.

In George Carlin's classic monologue on the merits of baseball over football, he concludes soothingly, "In Baseball, the object is to go home, and to be safe. I hope I'll be safe at home, safe at home."

Dad, I'll be coming to your home soon.

I Wrote With Light! 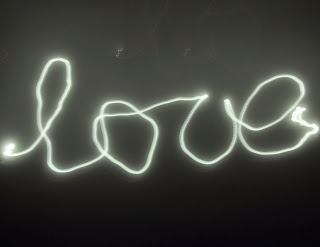 Note to Betsy:
The word photography means writing with light but most photographers claim ... Literally it means: "To Write with light" I cannot think of any better way to say it.
Several years ago, when I was first introduced to your website, you told me that photography literally meant writing with light. I had never heard that before. As I began to experiment with my camera, I began to see light (and shadows, and colors, and people) in a completely different way -- one of which resulted in the above photo. It is definitely one of my favorite experiments, and the best picture I have taken using the streetlight outside my front window to "write with light".
Thanks for the visual image you gave me to see my world differently. It is a pleasure to be able to Seize the Season! with you!

My revamped and revitalized website is taking shape. And the 2014 baseball season has started. These are harbingers of Spring and of hope.

First, my thanks to Kathleen Hazlett for her incredible, creative help with the website. She is a gem and can be found virtually at http://seizetheseason.com/.

Then there is baseball, another light of my life. Both Chicago teams are off to at least semi-good starts (the White Sox more so than the Cubs). Just watching a game--after the winter we've had--is joy on a plate. Home or otherwise. Baseball is the game of hope, not played against the clock, and has taught me much about how to live expecting good things. Of course, I'm still learning.

True baseball fans have yet another reason to enjoy this season: it is the 100th "birthday" of Wrigley Field. I look forward to being there in a few weeks for the big celebratory game and will be sharing my thoughts on Wrigley throughout the season. I'm also writing a memoir about baseball and hope and will give updates on that as well.

In the words of the last line of the national anthem, "Play ball!"

Posted by Unknown at 8:55 AM No comments: